The truth about forced feminisation’ By Maid and general slutbucket DaniTallulah

The truth about forced feminisation’ By Maid and general slutbucket DaniTallulah

Here’s a question for some of you subs out there. When you think of “forced feminisation” do you think of being made to wear something like this? 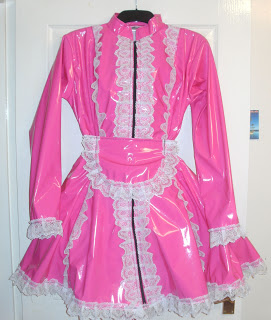 Utterly hideous, isn’t it? i think it is a size 20 bright pink pvc frilly dress. Now i am somebody, as my regular readers know, who spends as much time as i can in a dress etc and frankly i would be completely humiliated wearing something like that.

Now some of my friends may point out that i am not one of those gurls who likes to be a frilly sissy but for me what that dress represents is a false concept of forced feminisation. It plays on the idea that the man should look ridiculous and be totally humiliated when dressed as a woman. It rejects the inner woman within most men and propagates the idea that the sexes don’t cross over.

Items like that are produced not to feminise but actually to defeminise to make the so called man feel like less of a woman than he should. It is a cliché stocked by most Dommes in Their dungeons simply to play on what their tribute paying slaves expect not about a true process of subjugation and feminisation.

Now i don’t mean to demean those whose fantasy is to wear something like this. i have enjoyed humiliation and i understand the urge to want to be humiliated, but this does not mean it equates to actual feminisation.

There are also some fabulous frilly dresses out there which look so much better than that as worn by my best tranny friend @PrincessTST.

When i fantasised about being feminised before i was lucky enough to meet Mistress Scarlett Thorne it was far more looking something like this that i wanted to look like and wear: 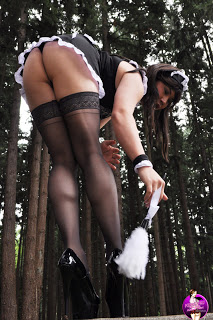 But this is all a distraction. So what then is the truth of forced feminisation?

This is something that i now have a lot of experience in having been “forced” to accept my identity as a woman rather than a man by Scarlett Thorne and watched others follow a similar path at different stages.

What i believe is that all men have the potential to become a woman. After all we all have female physical characteristics, if you doubt that play with your nipples for a moment. To widely different degrees we also are born with a psychological and spiritual woman inside us which with nurturing can become your dominant feature, as it has become with me.

What happened fairly rapidly was a process of forced feminisation, something thatMistress Thorne excells and delights in. i was dressed in that first session and finger f***ed, but from there a long process of replacing what was a man with what is now a woman.

This process involved learning about my female identity, getting new skills such as using make up, changing my body language, getting rid of hair, changing my thought processes and interests, and all sorts of other things. All of this was done through instruction but would never have happened had i not been pushed into it byScarlett Thorne.

True to say i have adopted some stereotypes. i am a maid for Scarlett Thorne and i work as a whore. However, i have also got to a position where i am happy to go out as a woman and look like a normal woman in the street.

So this i believe is the truth about forced feminisation. It is a skilled process in a Domme/ sub relationship not only about humiliation but about turning what was a man into a woman by developing on the foundations which are naturally there already. It is less about pure humiliation and more about changing your identity and reshaping you. If done properly, as Scarlett Thorne has done with me, it will totally alter you forever.

While i realise most people do not want to or haver the time or opportunity to live the lifestyle i have there is no reason why this cannot be true for forced feminisation in sessions only. If you have had a really good session where you have been dressed and treated like a woman, then you should walk away feeling that you were one for that hour or two.

Anyway here is a picture of me working as a gurl and if you want a session with me do feel free to call 07532425141 or check out my website www.dani-t-girl.co.uk. 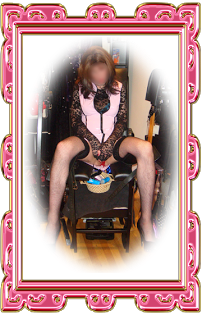 And here is a quick snap of me by a friend looking a little more normal trying out a ball gown. 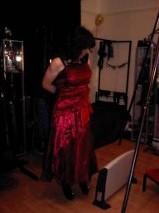 If you have any issues or concerns about being a tranny or sub then email me at trannyagony@live.co.uk or tweet me on @DaniTallulah.